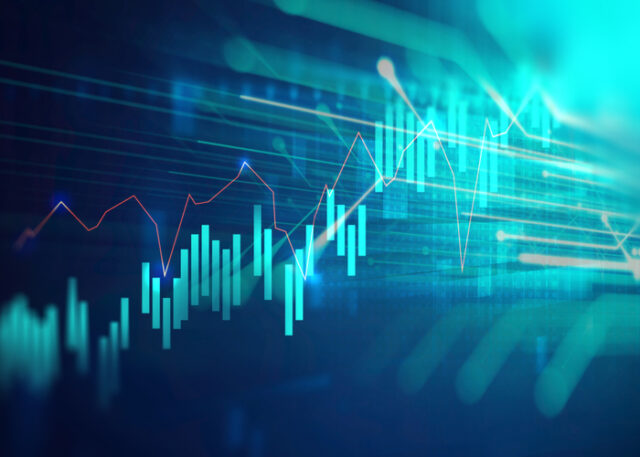 While the stock market is experiencing volatility, remember to focus on your long-term goals. Guarantees cannot be made, but, historically, markets have bounced back from downturns and delivered returns when you look at the bigger picture.

The Bank of England (BoE) predicts inflation will now reach 13%. In response to the rising cost of living, the BoE increased its base interest rate to 1.75% – the biggest jump in 27 years – and forecasts that the UK will fall into a recession in the final quarter of 2022.

According to the rebuilding Britain index from Legal & General, 1 in 10 households said they can’t make further cuts to their budget to match soaring energy bills.

A study from the National Institute of Economic and Social Research suggests it could affect long-term financial security too. The organisation warned that 1 in 5 households would be left without any savings by 2024.

It’s not just households that are being affected – businesses are too.

The number of insolvencies increased by 67% in July when compared to June. CF Industries, which supplies around 60% of the UK’s CO2 supplies used in the food and drinks industry, announced it would temporarily halt operations due to energy prices.

The latest price cap coincided with some energy firms revealing they’d made record profits, which has led to accusations of profiteering. Energy companies have already faced a windfall tax and the latest figures could draw further political attention.

Statistics paint a gloomy picture for the coming months.

UK GDP fell by 0.1% in the second quarter. PMI data from S&P Global also indicates that businesses are struggling:

The UK’s trade deficit is also high. Linked to spiralling gas costs, imports were worth £11.4 billion more than exports in June. A persistent trade deficit can put pressure on the economy and currency.

One of the challenges facing businesses is labour. Brexit means there are far fewer EU workers available and it’s led to a shortage in some areas. However, official labour statistics show the UK had the largest rise in overseas workers since early 2020 in June 2022. The rise was almost entirely driven by workers arriving from outside of the EU.

In the eurozone, the manufacturing downturn worsened in July. According to the PMI, the reading was 49.8, putting it in negative territory. It’s the biggest decline since June 2020, when Covid-19 restrictions seriously affected operations.

It’s a similar picture in the private sector too, with a PMI of 49.4, indicating the sector is contracting.

As the largest economy in the bloc, Germany is often viewed as a stalwart. However, Germany’s central bank, Bundesbank, has warned that a recession is increasingly likely and has forecast that inflation will continue to accelerate and peak at more than 10% later this year.

France has kept energy prices lower than other countries through a price cap to protect businesses and consumers. EDF is now suing the government for €8.3 billion (£7 billion) after it forced the nuclear energy firm to sell at a loss. EDF is 84% owned by the French government, which plans to purchase the remaining 16% to nationalise the company and secure energy supplies.

One of the reasons inflation has been soaring globally is due to higher food costs.

Since the conflict in Ukraine began at the start of 2022, the country has been unable to export grain. It’s estimated that around 20 million tonnes are trapped in the country. The first grain ship in months left Ukraine in August, which could relieve some of the pressure. However, the country warned that the conflict means this year’s harvest will be halved.

The US bucked the trend in Europe, as inflation fell in June. Energy prices have fallen in the US, which led to inflation falling to 8.5% in July, down from 9.1% in June. The news meant Wall Street stocks rallied on the hopes that inflation had peaked.

Other signs suggest that the US is recovering. The job market reached pre-pandemic levels. It indicates that businesses are feeling confident about the future.

However, it’s not all good news, weaker demand led to the factory PMI in July falling to a two-year low.

China’s exports increased by 18% in June. However, economists have warned that the recovery could be short-lived as consumers around the world brace for a recession.

There are still Covid-19 lockdowns in some major cities across China to fight outbreaks of the disease. This, coupled with lower demand, led to factory growth contracting.